Son of Saul review: an outstanding, excoriating look at evil in Auschwitz 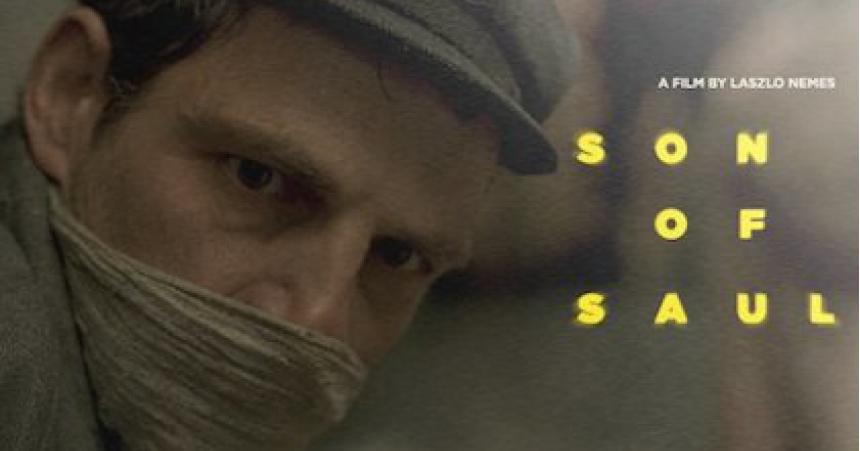 This astonishing debut film, about a prisoner in the concentration camp employed in the industrial processes of body disposal, is a horror movie of extraordinary focus and courage.

A season in hell is what this devastating and terrifying film offers – as well as an occasion for meditating on representations of the Holocaust, on Wittgenstein’s dictum about matters whereof we cannot speak, and on whether these unimaginable and unthinkable horrors can or even should be made imaginable and thinkable in a drama. There is an argument that any such work, however serious its moral intentions, risks looking obtuse or diminishing its subject, although this is not a charge that can be levelled at Son of Saul.

By any standards, this would be an outstanding film, but for a debut it is remarkable; it has the power of Elem Klimov’s Come and See – which surely inspired its final sequence – and perhaps also Lajos Koltai’s Fateless. It also has the severity of Béla Tarr, to whom director Làszlò Nemes was for two years an assistant, but without Tarr’s glacial pace: Nemes is concerned at some level with exertinga conventional sort of narrative grip which does not interest Tarr.

Son of Saul is set in the Auschwitz-Birkenau death camp in 1944, and one Hungarian Jewish prisoner named Saul (played by Géza Röhrig) is a member of the Sonderkommando, a group of prisoners given humiliating and illusory privileges as trusties, with minor increases of food ration, in return for their carrying the bodies from the gas chambers to pyres to be burned and then carting the ashes away to be dumped. The task is carried out at a frantic, ever-accelerating rate around the clock, as the Allies close in. Among the dead, Saul discovers the body of his young son, and sets out to find a rabbi among the prisoners to give the boy a proper burial in secret, using pleas, threats, blackmail and bribes – with jewellery (called the “shiny”) that he steals from the bodies – to achieve his aim. Saul’s desperate mission is carried out with the same urgent, hoarse whispers and mutterings as another plot in progress: a planned uprising, which Saul’s intentions mayupset. And all the time, the Sonderkommando are aware, through this network of whispers, that they themselves will be executed in due course by their Nazi captors.

For most of the film, Nemes shows us Saul’s agonised face, in a shallow focus, tracked through long, mostly unbroken takes, with the surrounding and background details often left blurred or indistinctly glimpsed: a muzzle-flash, a uniform, a naked body. Sometimes we see his back, with the red X marked on his jacket to indicate his status. His is a face from which all emotion appears to have been scorched away – it looks like the face of a pterodactyl. This, the film appears to be saying, is what the face of a survivor looks like, and indeed what the face of a non-survivor looks like: a dehumanised face. And yet Saul is to show another expression in the film’s final moments. In a way, this is how Nemes finesses the aesthetic or ethical question of how to create an individual drama within the horror, how to show and yet not show the horror itself: with intense, constrained focus.

One of the most devastating and deeply shocking aspects of Son of Saul is that it begins with a gas chamber scene, the kind of scenario that another film might have opted to end with, or to finish just before showing the horror. Nemes’s film allows us to grasp only belatedly that this is what is happening – we glimpse it at the edge of the frame which is largely dominated by Saul’s face. Prisoners are stripped and herded as if part of an industrial process of evil: the Nazi officers are all the time tricking and pacifying them with nonsense about how they are to be fed, clothed and used as craftsmen. And the awful truth is the presence of the Sonderkommando, visibly employed helping to superintend this business, is also to hoodwink and reassure. It is a theatre of pure evil, all but unwatchable.

Everything has to be hidden: in a way, the drama is hidden as well. Another reason for Nemes’s closeup procedure is that we, the audience, have to get in close to hear the conspiracy. A rare outburst comes when Saul confronts another prisoner at the lakeside where the ash is being disposed of, an exchange that results in an anguished attempt at suicide, a moment that finds its own heartstopping narrative echo in the last sequence. And it also results in a more familiar wartime-drama scene as a hatchet-faced SS officer, making sneering remarks about the elegance of the Hungarian language, attempts to interrogate the prisoners about what has just gone on: rather similar, in fact, to Ralph Fiennes’s icy character in Spielberg’s Schindler’s List. But Nemes calmly controls the juxtaposition of this traditional dialogue scene with the rest of the wordless inferno.

Son of Saul appears at a moment when the debate about cinema and the Holocaust has been revived with the restoration of Sidney Bernstein’s all-but-lost explicit official documentary German Concentration Camps Factual Survey and Andre Singer’s Night Will Fall, the documentary about the way in which this film was conceived and then nervously suppressed after the war.

Jean-Luc Godard believed that cinema’s essential failure was that it did not document the Holocaust in the hope of preventing it. In our time, Claude Lanzmann’s monumental Shoah is widely considered the most aesthetically successful approach because of the honesty and clarity of its testimony, which has no need for the (potentially facile) mechanisms of drama. Nemes’s film has found a way to create a fictional drama in all this, with a gaunt, fierce kind of courage – the kind of courage, perhaps, that it takes to watch.